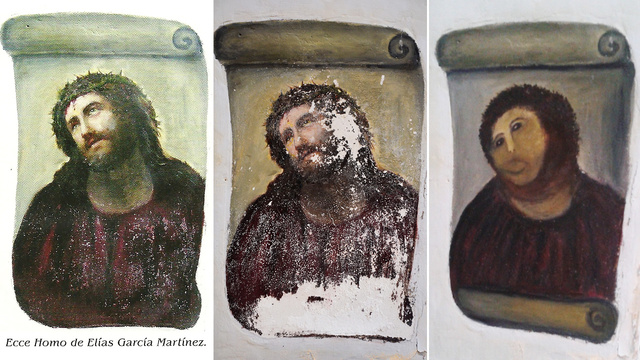 Gawker passes along the really painfully delightful story of what happens when a well-meaning non-professional (octagenarian, in this case), decides to help out a struggling work of art:

The restored version is apparently the work of an octogenarian neighbor of the church, who, noticing the damage to the painting, took it upon herself to restore the painting “with good intentions” but “without asking permission,” as culture councillor Juan Maria de Ojeda put it. It became clear to the amateur restorer — quickly, one imagines — that “she had gotten out of hand,” and she confessed to local authorities.

There are so many theatre-audience-talkback-workshop connections to draw here I don’t even know where to start. The easiest takeaway, obviously, is that audiences don’t always know how to fix your piece, and their ability to do so will be largely determined by 1) how much experience they have with a particular form and 2) how many of them are adding their insights. If the aspiring artist in the story had been a professional restorer, then her taking the job on in her spare time might’ve had much better results, and just been a kind act of charity. Likewise, if she had had even one accomplice, to stand over her shoulder and say “Hey you should probably use a different brush because that one is making Jesus look like a doll-eyed wookie,” well, maybe it wouldn’t have looked like that.

It’s the same with audiences and “constructive” feedback: you want to get a lot of it, and you want to get it from people you trust. There’s always the off-chance that some guy off the street will solve your play for you with one sentence of insight, but it’s also just as likely that he’ll say “Needs more clowns,” and then you write your whole restoration drama to make it somehow feature a modern-day clown transported in from the future, and before you know it you’re stuck with…hold on. I just had an awesome idea for a play.